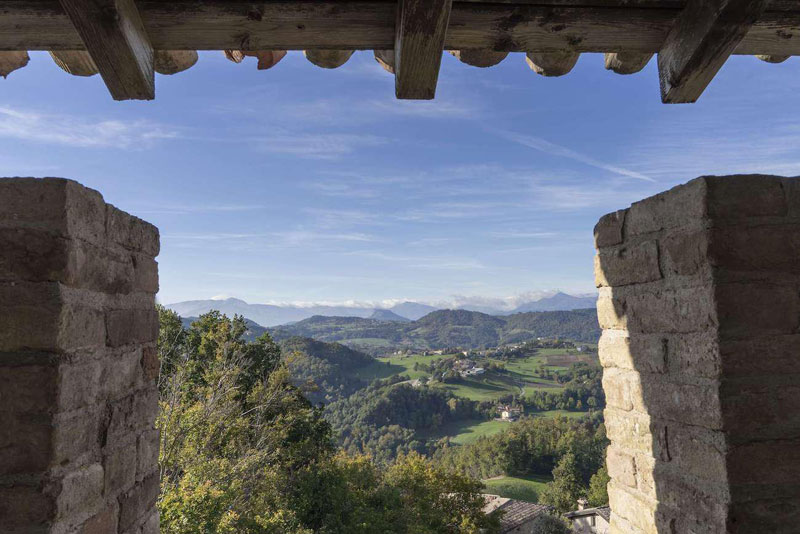 The most beautiful way to know Italy

Slow travel, little-known places, ancient castles, charming landscapes, and a world of discovery … welcome to the Via Matildica del Volto Santo, a pilgrimage route in Northern Italy from the ancient city of Mantua to the historic walled city of Lucca.

Italy off-the-beaten-track, this is a journey through time to discover the land ruled by Countess Matilde di Canossa, one of the most extraordinary & intriguing women of the Middle Ages.  Her fiefdom covered a vast area encompassing the regions now called Lombardy, Emilia Romagna, and Tuscany - lands that lay between the territories of the Holy Roman Empire and those controlled by the Pope. Recognizing this strategic geographical significance, this charismatic and mighty woman built a network of castles, outposts and towers all positioned on hilltops hard to conquer, all connected to the ancient roadways and spiritual centers. From this, the Via Matildica was born.

Over 6 days we will hike 89km of this 285km pilgrimage, taking in the best, visiting the most significant while winding through small hamlets, ancient forests, chestnut groves, and the golden hills of the Apennine Mountain range.  We “start” at the start in Mantua, the birthplace of the countess herself and where the blood of Christ is said to be held, and we “end” at the end in Lucca, the walled medieval town, home to the Volto Santo (the Holy Face, a wooden crucifix). Our bags are transported from Inn to Inn, our Italian guides Alice & Giorgio are with us every step of the way, and our meals are “Italy” at their very best.

It is, in many ways, as though the world of Matilda is more alive than ever before. We’re walking through the lands of her fiefdom, sleeping in the castles of her making, admiring the churches she protected, and, passing many a grapevine so laden with fruit we can’t resist the temptation, sampling the fruits of her rich lands. A glorious way to explore a forgotten Italy – far from the madding crowd.

Thursday October 12
Meet at the airport in Bologna for transport to Mantova (also referred to as Mantua). This small, fairytale-like Italian city is a UNESCO World Heritage Site and … the start of our wonderful pilgrimage.

Friday October 13
Mantova comes alive as we get a personal tour of this “secret Italian renaissance city”. A visit to the Basilica di Sant’Andrea will be a key focus as it is here that the greatest relic of Christianity is preserved: the Sacred Vessels containing the blood of Jesus. Countess Matilda was not only an excellent warrior, but a protector of the Pope and a pious woman. It is no wonder that her pilgrimage starts in this holy city. Our 2-hour tour is followed by an Italian cooking class with Elisabetta. Yes, roll up your sleeves and dive in … welcome to the secrets of Italian gastronomy. “Food is family here” and no journey is complete without the flavours and the beautiful people who share their culture and hospitality along the way.

Saturday October 14 – Day 1 – Reggio Emilia // Casola di Canossa to Canossa Castle
Distance = 6km (2h30m), Altitude = 300m to 550m
We start with history lessons in Reggio Emilia and end at the foot of a 10th century castle. Fully immersed and full of inspiration, we head to Matilda’s most famous stronghold, the Canossa Castle – an Italian Camelot, romantically crumbled and as mythical as ever. Canossa was the sight of a famous event in 1077 when the Emperor Henry IV walked barefoot in the snow to beg Pope Gregory VII’s forgiveness after a dispute between empire and papacy; Matilda was the mediator. To this day, the expression “andare a Canossa” (to go to Canossa) means “to eat humble pie”. We will indeed eat at the end of this day but with Ivan and Giuseppina in the hills of Reggio Emilia among sandstone walls & knurled portals. 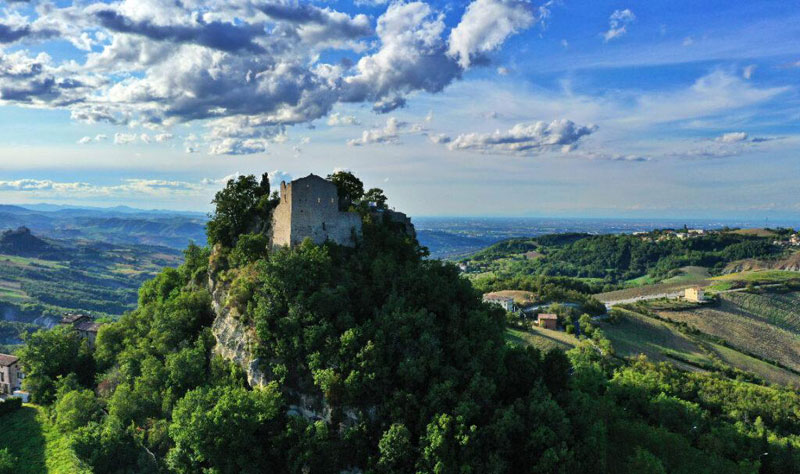 Sunday October 15 – Day 2 – Bergogno to Marola
Distance = 16km (6hrs) Altitude =700m – 350m = 450m
A solid day of hiking with breathtaking views of the entire Reggio Apennines and a day where chestnuts reign. Yes, we’ll end our hike in the small village of Marola amidst the most awaited festival in the region, the Festa Della Castagna (the annual Chestnut festival). Enjoying roasted chestnuts & mulled wine in the square, we’ll partake in a local tradition honoring the mighty chestnut. It is interesting to note that Matilde herself undertook many initiatives to help the poor one of which was to increase the plantation of chestnut trees since the soil was not suitable for growing wheat. The chestnut flour used by the locals was a crucial staple to survival.

Monday October 16 – Day 3 – Carpineti Castle to Cavola di Toano
Distance = 10km (3h30m) Altitude=350m to 800m
Dominating and fascinating, the hike to the Castle of Carpineti feels like stepping back in time. Carpineti was Matilde di Canossa’s favourite and most luxurious castle. The highest of all her fortresses and perhaps the safest, it is here that she spent possibly the happiest period of her life in the spring of 1077 with the companionship of Pope Gregory VII. The hike does not “present particular difficulties” and the view as we are approaching the castle is truly mesmerizing.
From here we make our way to the lively little village of Cavola before heading to Toano whose romanesque Pieve is a jewel of a place:  a rural stone parish dating back to 980. “It’s a serene and spiritual setting where you can reflect on the day’s hike and a thousand plus years of history.” 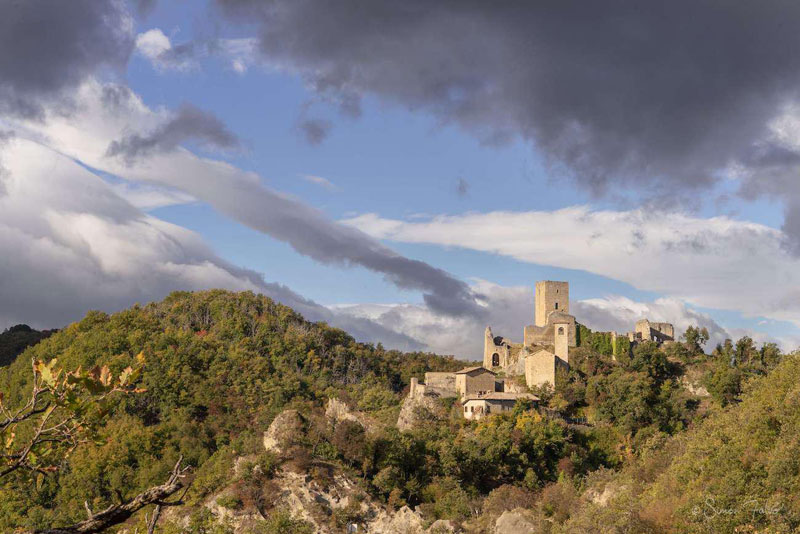 Tuesday October 17 – Day 4 – Civago to San Pellegrino in Alpe
Distance = 18km (7h30m) Altitude = 1,000m to 1,700m
The highest and most challenging stage of the Via Matildica, we’ll cross the border between Emilia Romagna and Tuscany along the Apennines ridge ending our hike in San Pellegrino in Alpe. The 700m of elevation gain are distributed over a wide section typical of mountainous regions – wild with unpredictable weather and … stunning panoramic views.

The hilltop town of Barga will be our resting point. This Tuscan hidden gem is a medieval town nestled in the heart of the Serchio Valley and is listed as “one of the most beautiful villages in Italy”.  We’ll dine, enjoy, and rest well in this charming setting. 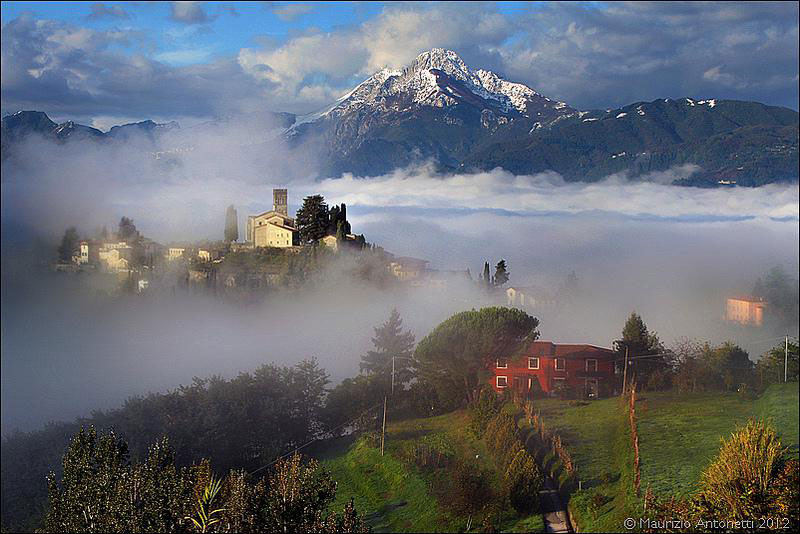 Wednesday October 18 – Day 5 – Barga to Borgo a Mozzano
Distance = 18km (6hr) Altitude = 400m to 100m
Today we hike through the heart of the Garfagnana region, an enchanting territory carved out by the Serchio River, rich in history, small medieval villages, and evocative scenery. We’ll head down into the valley ending at the village of Borgo a Mozzano, a 17th century village made famous by its bridge, the Ponte della Maddalena. “A magnificent and somewhat visionary medieval structure”, this bridge, also known as the Devil’s Bridge, was built by none other than our Matilda di Canossa.  According to legend, however, the bridge was built by Saint Julian who unable to complete this challenging project, asked the Devil for help offering, in return, the soul of the first living being who crossed the finished bridge. Once the bridge was finished, Saint Julian threw a piece of bread onto the bridge, luring a dog to cross and cheating the Devil himself. We rest at a hotel, a paradise between nature and … chestnut trees. 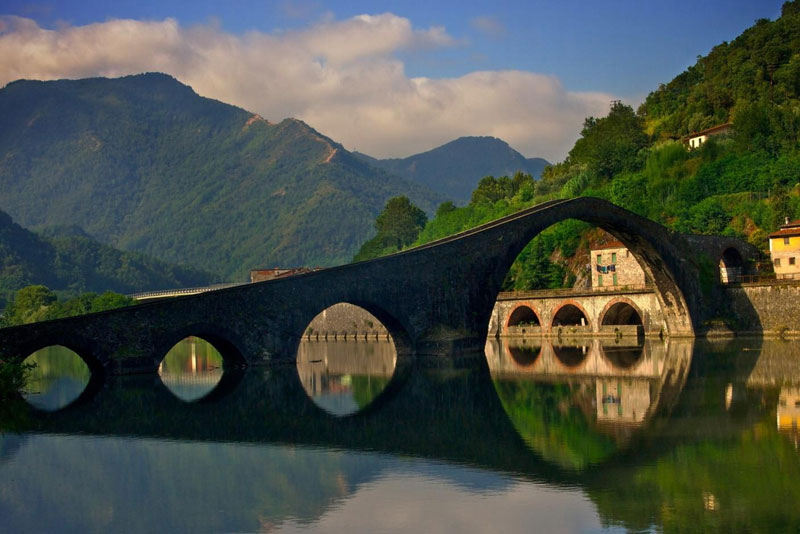 Thursday October 19 – Day 6 – Hike into Lucca
Distance = 21km (6h30m) Altitude= 270m to 20m
The last day of hiking – a day of olive trees, valley floors, and mountain views. We walk into Lucca, the end of the pilgrimage, home to the Volto Santo (the Holy Face of Lucca). We’ll make our visit to Saint Martin Cathedral of Lucca to set eyes on the ancient wooden carving of Christ crucified in Lucca, Italy. “Medieval legend states that it was sculpted by Nicodemus who assisted St. Joseph of Arimathea in placing Christ in his tomb after the crucifixion.”

Hotel, terrace, aperitifs, and celebration. We did it and we’ve arrived. Matilda would be proud.

Friday October 20 – Lucca
We say goodbye to Alice and Giorgio and hello to Lucca. One of the most beautiful and beloved cities in Tuscany, we’ll be treated to a guided tour starting at 10am. After that, we’re free to roam, shop or relax in this historic, fully walled enchanting city with cobblestone streets and … 100 Churches.

Saturday October 21 - Depart
From today onwards you are free to keep exploring, to stay put, or to return home. The trip is officially over, the pilgrimage is complete. From Mantova to Lucca with Matilda by our side: the most beautiful way to know Italy.

Reserve Your Spot or Enquire


© 2023 Live Out Loud Adventures (LOLA), Classic hikes around the World.